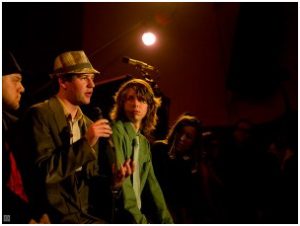 We had a great time at the Paonia Film Festival! Films ranged from the entertaining to the educational to the downright bizarre. It was interesting getting to see a glimpse of a nearby area of Colorado that I was unfamiliar with, and to interact with a whole new type of independent filmmaker. Let me tell you, this was definitely not your typical San Antonio Independent Christian Film Festival crowd! But we still had a good time. It was a new experience, and it was good to meet new filmmakers and to see some amazing talent.

But I’m sure you’re wondering, “Well, how did Ragged Edge do?!” It was one of two films in the drama category, and showed late in the evening. I was nervous the entire time, not knowing how this crowd would react to a film so targeted at a Christian audience. I had showed it to our church shortly after I finished it, and they reacted the way I had hoped they would. I had no idea what to expect at Paonia, especially since a lot of the films shown prior had a distinctive environmentalist worldview. I was worried that they either wouldn’t get it, or worse, misinterpret the message as an attack on Christians. But I was pleasantly surprised. The audience reacted almost the same as the people at church, and seemed to really be touched by it. After the film showings, there was a Q&A session with all the filmmakers, and I was asked about why I made the film. Praise God, I was able to answer without fear and shared the hope that we have in Christ. I later had a very encouraging conversation with the people who asked me that question, who also happened to be fellow believers! Also encouraging was that later in the Q&A, one of the other filmmakers said that he had really enjoyed Ragged Edge and complimented the cinematography (kudos to our DP, Dave Shaver!).

And while Ragged Edge didn’t win any awards (which were all determined by audience choice), I was very encouraged by the film that did win. And it didn’t just win one award, it won 5 of the 8 categories, including “Best Film.” The film was entitled Paper Heart, and was made by a group of young people from Paonia. I was blown away by the film, a touching silent black-and-white allegorical tale. After the showing, I remarked to my wife that the film could easily have been screened at SAICFF. During the Q&A, I found out why! The story was inspired by a stage drama that a friend of the filmmaker’s told them about. And that stage drama… was from a Christian college. When I found that out, I was floored. Even at a secular film festival, chock full of films with twisted worldviews, God can still be glorified, even in subtle ways!

That wraps up my report from the Inaugural Paonia Film Festival! I vlogged while we were there, which you can check out below or by clicking here.