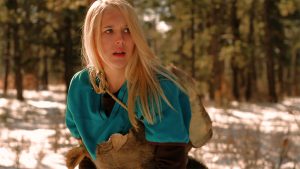 On the run from a deadly tyrant, an escaped prisoner stumbles upon a half-dead traveler who may not make it without her help.

Free is a short film that takes place during the first season of the Delantare series, currently in pre-production by Standing Sun Productions.  Filmed in one day, Free was made as a companion piece/concept reel to introduce people to the world and some of the concepts that we plan on bringing to life throughout the series.

Cast
Paige Awtrey as Zana
Jordan Wallace as The Man